From soaring gold and stocks prices, to rising Treasury and mortgage debt, markets across the board are expecting Fed Chairman Ben Bernanke to unleash more stimulus later this week. In the wake of the disappointing jobs report last week, the onus is on the Fed to do something sooner than later.

The big question, though, is will the Fed’s efforts prove successful in kick-starting the struggling economy?

Economists at Goldman Sachs predict the probability is “now above 50%” that the Fed will unveil a third round of quantitative easing, or QE3, on Thursday, when the Fed’s two-day policy meeting comes to an end. Barclays expects an extension of the Fed’s low-rate policy into 2015 and a reactivation of open-ended asset purchases, which would include the buying of both U.S. Treasurys and mortgage-backed securities.

More QE “remains a close call even if the chances of it happening have increased,” wrote Barclays analyst Guillermo Felices. “If it does, we think it would weaken the U.S. dollar and support risk appetite.”

Stocks and gold have already benefited from the prospect of more Fed stimulus. As Matt Phillips noted in today’s WSJ, stocks are up 10% and gold 12% from their June lows. The Dow Jones Industrial Average closed on Friday at its highest level since December 2007. Gold prices jumped to their highest levels since February. 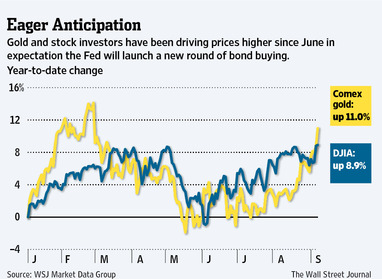 But with the economic recovery more than three years old, the Fed’s ability to boost the broader economy is in question. Critics of more central-bank intervention note mortgage rates are already hovering around historic lows.

Pushing them even lower may not help much.

Just six months ago, money market traders expected the Federal Reserve to raise interest rates by the end of 2013. Now, they see borrowing costs staying at record lows for about three more years as the economic outlook worsens.

Bond market measures from overnight index swaps, which indicate no increase in the federal funds rate until mid-2015, to a 62 percent decline in a measure of volatility in government bonds signal that rates will stay near zero for longer. The gap between two- and five-year Treasury yields, which decreases when traders expect benchmark rates to remain subdued, is more than 50 percent narrower than its average since 2008.

China’s imports shrank unexpectedly in August in a sign its economic slump is worsening and the Chinese president warned growth could slow further, prompting expectations of possible new stimulus spending.

Imports declined 2.6 percent from a year earlier, below analysts’ expectations of growth in low single digits, data showed Monday. That came on top of August’s decline in factory output to a three-year low and other signs growth is still decelerating despite repeated stimulus efforts.

The weakness in China’s demand for imports is bad news for exporters in Southeast Asia, Australia, Brazil and elsewhere that are counting on its appetite for oil, iron ore, industrial components and other goods to offset anemic Western markets.

Analysts expect Chinese growth that fell to a three-year low of 7.6 percent in the latest quarter to rebound late this year or in early 2013. But they say it likely will be too weak to drive a global recovery without improvement in the United States, which is struggling with a sluggish recovery, and debt-crippled Europe.

Wang Tao at UBS takes aim at the “Rmb1tn stimulus“; she thinks it is not really real:

Well, that is what we call a bit of make-believe. Sure, the weak August data seem to have prompted more policy actions by various government agencies and we expect better implementation and coordination as well. But a closer look at the newly announced approvals shows that these projects have been approved in the past 2-3 months, some as early as April and May, and most of these projects are part of the local governments’ 12th Five Year Plans. In other words, many readers believed that the government suddenly rolled out a RMB 1 trillion stimulus package in the past week ahead of the weak August data, but the truth is that the NDRC just suddenly PUBLISHED the project approvals of the past few months, perhaps to demonstrate that the government’s policy support in the form of infrastructure investment has already been underway.

Wang has also downgraded her forecasts for full-year GDP growth in 2012 to 7.5 per cent from 8 per cent. Yes, 7.5 per cent is the government’s target, but strategists have become so accustomed to seeing China exceed its targets that it was assumed this year would be the same.

However Zhiwei Zhang of Nomura has more faith in the stimulus, and forecasts these measures will help GDP growth rise to 8.8 per cent in Q4. We asked him by email whether he thought the fact that much of the Rmb1tn stimulus might not be ‘new’ was significant. He replied that he sees the signalling of the announcements is significant in itself, and the number of subway lines planned this year is also notable:

[T]o me the fact that they announced these projects so intensively in two days suggests they understand growth faces substantial risks and they need to signal that their policies have changed to a more proactive approach. This is a stimulus as gov only approved 8-9 subway line in 2011 but approved 25 in the past several months. President Hu’s speech in APEC confirms the emphasis on infrastructure investment.

Titan Machinery Inc.’s (TITN) fiscal second-quarter profit was down 17% as the agricultural and construction-equipment retailer saw its margins pressured by a drought and a competitive retail environment, despite a better than expected double-digit jump in revenue. Shares fell 15% to $21.55 premarket as the company also cut its earnings view for the year.

Heating, ventilating and air-conditioning-systems provider KSW Inc. (KSW) agreed to be acquired by Related Cos., a closely held New York real-estate developer, for $32.1 million in cash. Related will pay $5 a KSW share, a premium of about 5% to the company’s Friday close. Shares rose 22% to $4.97 in premarket trading.

Michael Kors Holdings Ltd. (KORS) said certain shareholders, including some members of its management, intend to sell up to 23 million shares of the luxury retailer in a secondary offering. The company had 199.4 million shares outstanding as of June 30. Shares fell 5.8% to $52.76 premarket.

Geron Corp . (GERN) is discontinuing its Phase II study of imetelstat in metastatic HER2-negative breast cancer because the median progression-free survival was shorter than the comparison treatment. The biopharmaceutical company was evaluating imetelstat in combination with chemotherapy drug paclitaxel and comparing it to paclitaxel alone. Shares tumbled 47% to $1.54 premarket.

Mellanox Technologies Ltd .(MLNX, MLNX.TV) named Finance Vice President Jacob Shulman as its new chief financial officer, succeeding Michael Gray who is retiring to spend more time with his family. Mr. Gray, who has served as finance chief since 2004, will step down from that role Nov. 5, but his day-to-day employment with the data-storage company will continue until Feb. 4. Shares down 3.6% to $107 premarket.

Biopharmaceutical companyCell Therapeutics Inc . (CTIC) will present to investors at the annual Rodman & Renshaw global investment conference on Tuesday regarding the company’s plan to market non-Hodgkin’s lymphoma treatment Pixuvri in the European Union, the status of clinical trials of pacritinib including plans to initiate a phase III trial in the fourth quarter, and other corporate updates. Shares rose 4.7% to $2.43 premarket.

Health sciences companyNordion Inc . (NDZ, NDN.T) said it was unsuccessful in its claim for specific performance or monetary damages relating to Atomic Energy of Canada Ltd.’s canceled construction of the Maple facilities. Shares dropped 19% to $8.64 premarket.

Builder Beazer Homes USA Inc. (BZH) proposed a one-for-five reverse stock split and a dramatic reduction in the number of shares authorized for issuance to 100 million from 180 million, as the builder works to raise its stock price closer to other builders.

Kinder Morgan Inc .(KMI) agreed to pay $110 million to settle claims related to its $21 billion acquisition of El Paso Corp. The companies had faced a harsh critique of their handling of their acquisition, including allegations by former El Paso shareholders that they were shortchanged.

Brazilian state-owned oil companyPetroleo Brasileiro S/A (PBR, PETR4.BR), or Petrobras, is seeking a joint-venture partner to invest as much as $4 billion into the company’s deepwater drilling operations in the U.S. Gulf of Mexico, people familiar with the matter told The Wall Street Journal.

Regulators closed Minnesota-based First Commercial Bank on Friday, bringing the nationwide tally of bank failures to 41 for the yearRepublic Bancorp Inc .’s (RBCAA) subsidiary Republic Bank & Trust Co. has agreed to acquire all of the deposits and substantially all of the assets of the failed bank, in a deal it says will boost its earnings immediately. First Commercial Bank had about $215.9 million in total assets and $206.8 million in total deposits as of June 30.

Scotts Miracle-Gro Co . (SMG) will pay $12.5 million in fines, penalties and other costs after admitting to improper use of pesticides. The company pleaded guilty earlier this year to applying insecticides to its wild-bird food that was toxic to birds, the Department of Justice said.