• At 9:45 AM ET, the Chicago Purchasing Managers Index for August will be released. The consensus is for a decrease to 53.0, down from 53.7 in July.

• At 9:55 AM ET, the final Reuter’s/University of Michigan’s Consumer sentiment index for August will be released. The consensus is for a reading of 73.5, down from the preliminary August reading of 73.6, and up from the July reading of 72.3.

• At 10:00 AM, the Manufacturers’ Shipments, Inventories and Orders (Factory Orders) for July will be released. The consensus is for a 0.9% increase in orders.

• Also at 10:00 AM, Fed Chairman Ben Bernanke will speak at the Federal Reserve Bank of Kansas City EconomicSymposium, Jackson Hole, Wyoming, “Monetary Policy Since the Crisis”

Federal Reserve Chairman Ben Bernanke will likely acknowledge the U.S. central bank is actively considering another round of monetary easing in his keynote Jackson Hole speech on Friday.

But the Fed chief could disappoint fidgety financial markets if he stops short of signaling another bond-buying program is imminent, which many analysts say is a strong possibility.

First off, there will not be an outright pledge from Bernanke to start up another stimulus program, a so-called QE3. This speech is mostly a set-up for later Fed meetings. Even after the 2010 Jackson Hole speech, in which Bernanke gave the markets the big nose-tap, the Fed didn’t move on QE2 until November.

We imagine on balance the speech will be neutral, and actually reiterate a lot of what we already know Bernanke thinks, leaving him room to move in whatever direction the economy tells him to move. Bernanke straddles the line between the Fed’s doves (in favor of more easing) and hawks (against easing), and this speech will likely reinforce that, even if the balance of the FOMC’s voting members seem to be in favor of easing. The biggest vote is Bernanke’s, and he isn’t committing to anything yet.

As for the speech itself, here are the biggest tea leaves to watch for:

– His options. Expect him to outline the Fed’s options, but look for which options he seems to linger on the most. Mortgage-backed securities? Treasury bonds? Open-ended QE (doubt he’ll mention this, although others have pushed for it)? This could give a hint as to what the next stimulus program might look like should one materialize.

– Uncle Sam. Does Bernanke use this opportunity to once again try and push Congress and the President to act? This has been an underlying theme out of Bernanke for months. Ultimately, he knows the central bank can’t solve the economy’s problems. Bernanke will act if Congress completely shirks its duties; cough! cough!;, but it’s obvious he doesn’t relish that scenario.

The inflation rate is below the Federal Reserve’s 2% goal. That gives central-bank officials room for more steps to spur the economy without sending prices surging. The core PCE price index — the Fed’s preferred inflation measure — was running just 1.6% higher than a year ago in July, the lowest rate since October. Officials have indicated they may do more unless the economy improves substantially. 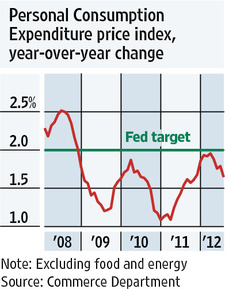 Under the proposal, ultimate authority would pass to a new ECB “supervisory board” separate from the ECB’s existing governing council. Although its make-up is still being debated, the leading plan would create a 23-member board: a national representative from each eurozone country plus six independent members, including its chair and vice-chair.

A separate board was deemed necessary to establish a firewall between the ECB’s existing monetary activities, which includes providing cheap loans to struggling banks, and its new supervisory role.

Officials cautioned that the legislation was still being drafted and would not be formally unveiled by Mr Barroso until his state of the union address on September 12. To become law, it must be approved by all 27 EU heads of government; commission officials hope they will agree at an EU summit before the end of the year.

A new single banking supervisor would be the most significant change in eurozone financial governance since the single currency’s creation, giving the EU the kind of federal authority it has thus far lacked to decisively tackle the two-year-old crisis.

It is also a key demand from Berlin in return for what some believe is a more significant crisis-fighting tool: giving the eurozone’s €500bn rescue fund the power to bail out struggling banks directly. Bank bailouts in Spain and Ireland have saddled governments with huge debts that would be wiped away if the funds came directly from the rescue system.