The number of Americans filing new claims for jobless benefits unexpectedly rose last week, suggesting the labor market is healing too slowly to make much of a dent in the unemployment rate.

Initial claims for state unemployment benefits rose 4,000 to a seasonally adjusted 372,000, the Labor Department said on Thursday. That was the highest level in five weeks.

The US Federal Reserve is set to ease policy unless there is a sharp change in economic data after the minutes of its August meeting revealed a strong consensus for action.

“Many members judged that additional monetary accommodation would likely be warranted fairly soon unless incoming information pointed to a substantial and sustainable strengthening in the pace of the economic recovery,” say the minutes of the rate-setting Federal Open Market Committee.

That is an unusually clear statement of the FOMC’s views about future action and sets a tough condition for it to change course and keep policy on hold.

Bullard said economic data has changed since the Fed meeting on July 31 and Aug. 1, when the central bank’s Open Market Committee indicated more stimulus would “be warranted fairly soon” unless the economy improved.

But he labeled those minutes as “stale” and said if growth continues around 2 percent for the remainder of the year, the Fed likely will remain on the sidelines.

German business activity in August fell at its fastest clip in more than three years, Markit said. The preliminary composite purchasing managers’ index declined to 47.0 from 47.5.

The below-50 reading means activity shrank month-to-month in August for the fourth straight month, and suggests Germany’s economy will struggle to grow in the coming quarters. Official data Thursday confirmed its economy grew 0.3% between April and June.

Germany’s weakness in August suppressed business activity in the euro zone overall, Markit said. The composite PMI for the currency union was little changed at 46.6, from 46.5 in July, well within contraction territory. The lack of substantial improvement came despite France posting its least-negative reading in six months.

A preliminary gauge of manufacturing activity in China on Thursday sent another warning signal on the state of the world’s second-largest economy.

The preliminary HSBC China Manufacturing Purchasing Managers Index fell to a nine-month low of 47.8 in August, compared with a final reading of 49.3 in July, HSBC Holdings HSBA.LN -0.16% PLC said. 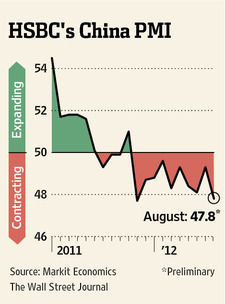 A reading below 50 indicates contraction of manufacturing activity from the previous month, while one above 50 indicates growth.

The preliminary August reading marks the 10th straight month the index has been in contractionary territory, signaling extended difficulty for manufacturers.

Best Buy Co. has resumed talks with founder Richard Schulze about an agreement that would allow him to conduct due diligence in his effort to acquire the company, said two people with knowledge of the matter.

Best Buy initiated the discussions shortly after announcing quarterly earnings that missed analysts’ estimates on Aug. 21, said one of the people, who asked not to be identified because the negotiations are private. The two sides may reach an agreement later this week, or talks could again break down, the person said.

The largest U.S. electronics retailer has lost 13 percent of its value this week as investors bet that Schulze’s Aug. 6 proposal to buy it for as much as $9.5 billion is becoming less likely. Interim Chief Executive Officer Mike Mikan said Aug. 21 on Best Buy’s earnings conference call that the due diligence offer still stands.

]– The retailer reported second-quarter profit of $0.36 per share, five cents below estimates. It also cut its full-year guidance because of higher costs.

] – The maker of Spam and Dinty Moore products earned $0.41 for its fiscal third quarter, matching Wall Street estimates. The company’s revenue continues to grow as more people eat at home, but its profits are being impacted by rising commodity prices.

] – HP earned $1 per share for its third quarter, two cents above estimates. But revenue was on the light side and its full-year earnings per share (EPS) forecast of $4.05 to $4.07 per share is partially below or at best equal to consensus forecasts of $4.07 a share. CEO Meg Whitman said the company is still in the early stages of a multiyear turnaround.

] – The chipmaker is cutting about 15 percent of its workforce as part of a restructuring that will save up to $35 million annually. The cuts will begin in the next few weeks and will be completed during the fourth quarter.

] – The company has lowered its full-year guidance for the second time in three months, with the apparel maker cutting full year forecasts to $2.15 to $2.30 per share. That’s below consensus estimates of $2.53. Guess cites continued weakness in Europe and falling sales in North America.

] – The doughnut chain reported a second-quarter profit of $0.12 per share, excluding certain items, well above consensus estimates of $0.05. It also raised its yearly earnings forecast by one cent, now expecting to earn $0.22 to $0.25 per share. Krispy Kreme is being helped by a rise in domestic same store sales.

] – The Federal Trade Commission closed its investigation of the company’s deal to buy Instagram without taking any action, meaning the deal can proceed as planned.

], which is calling on regulators to reject Nasdaq’s plan to compensate for losses related to Facebook’s initial public offering. Citi says Nasdaq was “grossly negligent” in its handling of the offering, and that it should be entitled to recover all losses. Nasdaq has so far declined comment.

Jurors are continuing their deliberations today in the Apple [AAPL  668.87

] vs. Samsung patent case. Experts are not expecting a quick verdict in the extremely complex case, which involved 109 pages of instructions to the jury.

] – The company has raised its full-year dividend by 8 percent, with the world’s biggest spirits maker expressing confidence about growth in its African and Asian markets.

] – Blackstone and market-maker Getco have sold some of their holdings in Knight Capital Group [KCG  2.77

] to Scottrade, according to Reuters. The two were among those involved in the recent rescue of Knight Capital after its recent $440 million software glitch-related trading loss.

] and other memory chipmakers could be affected by reports that prices for DRAM chips are falling at a faster rate. Japan’s Nikkei business daily says prices have dropped 9 percent from their late June highs.

] – The parent of the SuperCuts chain earned $0.40 per share for the fiscal fourth quarter, nine cents above estimates. But revenue fell short, as fewer customers visited its salons.