…Shares of Alcoa AA -2.23% eased 0.2% in premarket trading. The blue-chip aluminum company is to report second-quarter results after the closing bell, marking the unofficial kick-off of the reporting season.

The economic calendar is relatively light, with only data on consumer credit in May due at 3 p.m. EDT.

European markets were mostly lower, with the Stoxx Europe 600 down 0.2%, as investors were skeptical that a Monday meeting of euro-zone finance ministers will make any progress in stabilizing the euro zone’s debt crisis.

Euro-zone finance ministers are discussing details on how to bail out the Spanish banking system, as well as the creation of a common regulator for the region’s banks.

Asian markets were broadly lower, led by the 2.4% tumble in China’s Shanghai Composite to a six-month low after Premier Wen Jiabao said over the weekend that there was “huge pressure” on the Chinese economy. Japan’s Nikkei Stock Average shed 1.4%.

Spain’s bond yields have climbed to dangerously high levels again. European leaders tried to calm markets last month by agreeing on measures to reduce borrowing costs for Spain and Italy. But investors want details. The yield on Spain’s 10-year government bond fell early this month to 6.30% from 6.95% but has returned to nearly 7% — a level considered unsustainable. 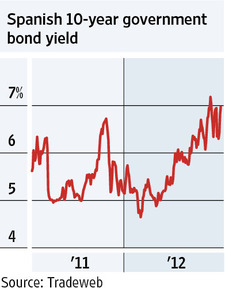 Japan’s current-account surplus was the smallest for the month of May since at least 1985 and machinery orders fell the most in more than a decade.

The excess in the widest measure of trade shrank 63 percent from a year earlier to 215.1 billion yen ($2.7 billion), the Ministry of Finance said in Tokyo today. The median estimate of 24 economists surveyed by Bloomberg News was for a surplus of 493.1 billion yen. Machinery orders, an indicator of capital spending, fell 14.8 percent in May from the previous month, the Cabinet Office said, the biggest drop since 2001.

] – The managed care provider will be bought by rival WellPoint [WLP  59.91

] for $92 a share, or $4.9 billion in cash. The deal represents a better than 40 percent premium over Friday’s closing price for Amerigroup.

] – The provider of foreign-exchange trading platforms agreeing to be acquired by Thomson Reuters [TRI  28.47  —  UNCH

] – Multiple reports say Vivendi is interested in selling its 60 percent stake in the video game maker, a sale that reportedly could raise as much as $10 billion. Reuters reports that Time Warner [TWX  38.59  —  UNCH

] could be among possible bidders.

] – The company could see its $1 billion purchase of Instagram approved by the Federal Trade Commission by mid-August, according to the New York Post.

] – The company’s board will meet Wednesday to discuss the status of the company’s CEO search, according to CNBC’s Kayla Tausche. Interim CEO Ross Levinsohn is still considered the leading candidate for the permanent job, but it’s unclear if the board will make a final decision at that Wednesday meeting.

] – JPMorgan Chase has begun coverage of the China-based online video company with a rating of “overweight.”

] – UBS has downgraded the stock of both credit-card companies to “sell” from “neutral.”

] – Jefferies has started coverage of Wells Fargo with a “buy” rating and a $39 price target, saying the bank has above-average growth potential.