The Federal Reserve will probably decide today to expand Operation Twist beyond $400 billion to spur growth and buy protection against a deeper crisis in Europe, according to a Bloomberg News survey of economists.

Fifty-eight percent of respondents in a June 18 poll said the Fed will prolong the program, which seeks to lower borrowing costs by extending the average maturity of the securities in the central bank’s portfolio. The current program ends this month.

Policy makers led by Chairman Ben S. Bernanke may conclude that growth is too feeble to reduce unemployment much further after payroll growth came close to stalling in May. At the same time, with inflation close to their 2 percent goal and the Greek election reducing the risk of a euro breakup, they may decide an additional round of quantitative easing isn’t needed for now, economists said.

Greece’s Socialist party leader Evangelos Venizelos said Wednesday that his Pasok party, the conservative New Democracy and the Democratic Left are in the process of putting together a government agenda, as they had reached agreement to form a coalition government.

“The parliamentary conditions [majority] have been met for the formation of a government,” Mr. Venizelos said after meeting New Democracy leader, Antonis Samaras.

Mr. Samaras is set to be sworn in as prime minister Wednesday, state television Net reported.

Mr. Samaras will meet Greek President Carolos Papoulias to inform him that he has secured enough seats in parliament to form a workable government.

there is slightly better news for Spain. The country’s 10-year yield has dipped back below 7 per cent – down 13 basis points to 6.91 per cent – despite the previous day’s auction showing Madrid had to pay 5 per cent to borrow for just a year.

A sale of €2bn of medium-term paper due on Thursday is the next hurdle for Spain – though tension looks to have eased with news that the G20 is trying to reduce eurozone borrowing costs.

The less anxious mood and worries about Berlin’s future exposure to the eurozone’s debt difficulties is reducing the demand for haven Bunds, with 10-year yields up 7bp to 1.58 per cent.

The Bank of England’s Monetary Policy Committee came within one vote of backing more monetary stimulus for the economy at its meeting earlier this month, reinforcing expectations that a fresh injection could come in July.

The split vote reflected increasing worries about Britain’s sluggish economy and the impact of financial trouble in the eurozone, the biggest U.K. export market. The recent drop in inflation, meanwhile, has eased the central bank’s concerns about the inflationary risks of more stimulus.

Governor Mervyn King joined with two other members in favor of an injection of 50 billion pounds ($78.6 billion), with a fourth member voting for a smaller shot of 25 billion pounds, according to minutes of the MPC’s June meeting released Wednesday. Five members opposed additional stimulus.

The minutes noted that a majority of the committee believed “further stimulus was likely to become warranted at some point.”

The protracted euro-zone debt crisis has caused market sentiment to swing back and forth like spectators’ heads at a tennis match. Any news that suggests a resolution to the situation has been greeted with risk-on reactions, while negative news has sent investors fleeing for safety. 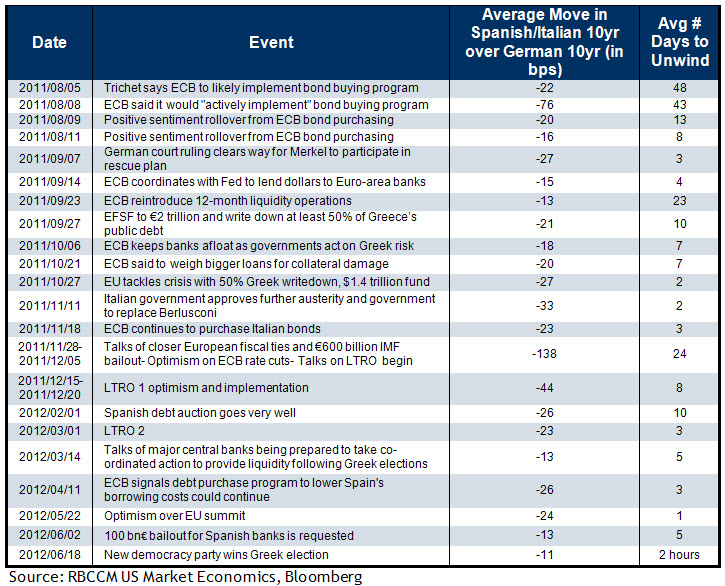 The risk-on impact of good headlines is waning, however, say economists at the Royal Bank of Canada, which should put policy makers on notice.

The RBC group mapped out market reactions since August 2011 to news that was viewed as positive to curbing the debt crisis. As expected, positive news led to narrower spreads between the 10-year bonds of Spain and Italy versus 10-year German bunds.

But just as an addict comes down faster after each subsequent drug dose, the markets have shrugged off positive moves at a quicker pace. For instance, the implementation of the first long-term refinancing operations by the European Central Bank triggered a 44 basis-point narrowing in spreads that took 8 days to unwind. The second LTRO caused only an 23-bp drop which unwound in three days.

Gevo Inc. GEVO +1.02%  shares rallied 18% after the company said a court had ruled in its favor in a case where rival Butamax Advanced Biofuels LLC had sought an injunction against the company’s sale of certain products.

AspenBio Pharma Inc. APPY +1.98%  shares tumbled 38% after the firm said it will sell 6.1 million shares at $2 per share. That’s a 36% discount to the shares’ closing price on Tuesday.