U.S. home building slowed in May amid a pull back in multifamily construction, but new permits granted reached their highest level since 2008, suggesting future demand for new houses. Home construction decreased 4.8% last month from April to a seasonally adjusted annual rate of 708,000, the Commerce Department said Tuesday.

Economists surveyed by Dow Jones Newswires had forecast May housing starts would grow to a seasonally adjusted annual rate of 720,000, which would have been a 0.4% improvement from the prior month’s previously reported figures. 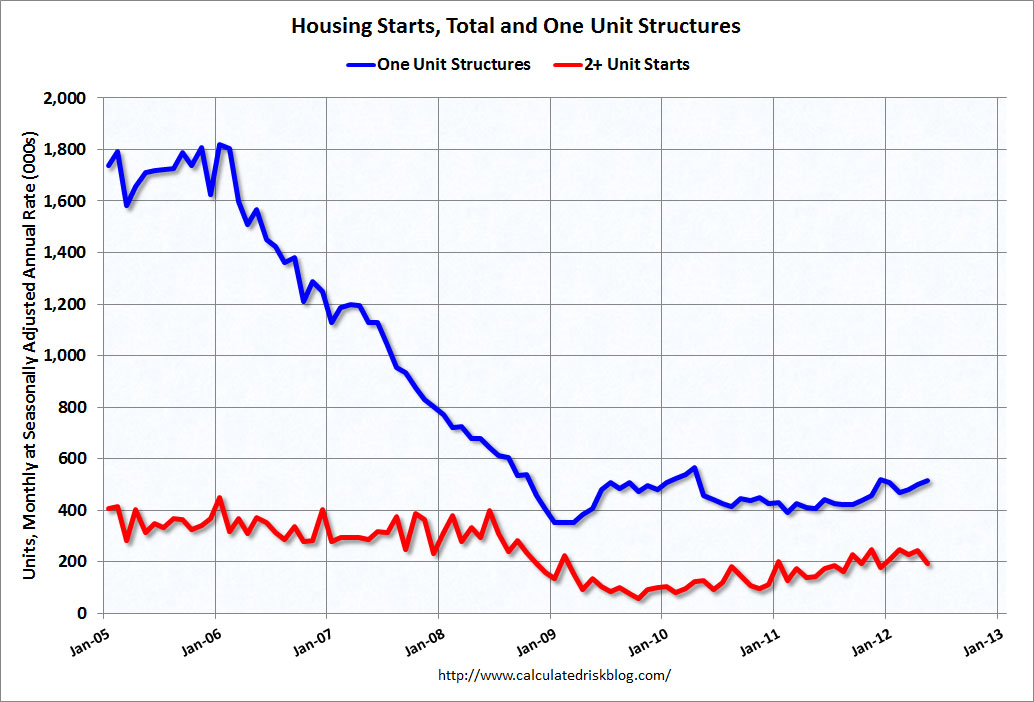 Spain, the euro zone’s fourth largest economy, had to pay 5.07 percent to sell 12-month Treasury bills and 5.11 percent to sell 18-month paper – an increase of about 200 basis points on the last auction for the same maturities a month ago.

While Spain’s 10-year bond yields eased slightly to around seven percent after the sale, the auction underscored the government’s increasingly shrill pleas for help from the European Central Bank, two days before Madrid tries to sell three-to-five year bonds.

Treasury Minister Cristobal Montoro said on Monday the ECB should step in to fight market pressure, essentially a call for the bank to buy Spanish bonds again, as it did last year.

Oracle reported its fourth-quarter profit increased 7.5% in a surprise announcement three days ahead of schedule that appeared to be triggered by the departure of a top sales executive. Oracle shares were up 5.1% to $28.50 premarket.

J.C. Penney said its president, Michael R. Francis, is leaving the company, effective Monday, after eight months at the retailer. Shares were last trading 5.7% lower at $22.93 in premarket trading.

Walgreen agreed to buy a 45% stake in the pharmacy-led health and beauty group Alliance Boots GmbH, a $6.7 billion cash and stock deal the drugstore chain makes as it looks to diversify in a changing global health market. The company also Tuesday reported its fiscal third-quarter earnings fell 11% as sales continued to decline on the loss of Express Scripts Holding Co.’s (ESRX) members. Walgreen shares slipped 2.1% to $31.30 premarket.

HCP Inc. (HCP), a real-estate investment trust focused on health-care facilities, agreed to sell 7.8 million shares to Citigroup Inc. (C). It plans to use proceeds to repay debt, among other corporate needs. Shares slumped 3.5% to $42.10 premarket.

A U.S. district court sided with video-ringtone company Vringo Inc. (VRNG) regarding four out of six issues in an ongoing patent case it has against a handful of major companies. Shares surged 27% to $5.05 premarket.