The euro fell against the dollar and the yen as worries about Spain and poor euro-zone activity data weighed on the common currency.

The single currency sank around a cent against the dollar to trade as low as $1.2413 while it also lost ground against the yen to trade as weak as ¥97.05 before eventually stabilizing.

The euro came under pressure right from the start of European trading after Spanish Budget Minister Cristobal Montoro said the European Union may need to act faster to support Spain, which doesn’t have the option of a full blown bailout given the size of its economy.

Traders are awaiting news on a teleconference between Group of 7 finance ministers and central bankers on Tuesday and the European Central Bank meeting on Wednesday.

While any headlines from the G-7 call are expected to be the main focus, data published Tuesday highlighted the severe effect the fiscal crisis is having on Europe’s economies and contributed to the euro selloff, said Michael Sneyd, currency strategist at BNP Paribas in London.

Survey data revealed that Spanish services fell in May at its fastest rate since November while overall activity in the euro zone’s services sector as a whole continued to decline last month.

Finance ministers and central bankers from the Group of Seven nations agreed to cooperate in order to deal with problems in Spain and Greece, Japanese Finance Minister Jun Azumi told reporters in Tokyo after a G-7 teleconfernce, news reports said Tuesday. Officials didn’t discuss the possibility of a Greek exit from the euro, he said, according to Bloomberg. He also said a statement wouldn’t be issued, according to reports.

“What the risk premium tells us is that as a state and as Spain overall we have a problem when it comes to going to the markets,” Montoro said. “What that risk premium shows is that the door of the markets isn’t open to Spain.”

The German chancellor, Angela Merkel, said that finding the way to “more Europe, not less” was the next task for Europe’s leaders. “The world wants to know how we expect the political union to complement the currency union,” Ms. Merkel said at a news conference here Monday with José Manuel Barroso, the president of the European Commission. “We have to find an answer in the foreseeable future.”

German officials remain adamant that they are not talking about euro bonds, or jointly issued debt, which they have dismissed as unconstitutional. More likely is a plan to combine much of Europe’s bad debt into a single fund with the idea of paying it off over 25 years, an idea gaining traction in Germany as an alternative to euro bonds, officials say.

Orders for manufactured goods such as computers and electronics declined again in April. The value of new orders fell 0.6% to $465.98 billion, after a downwardly revised 2.1% slide in March, the Commerce Department said. Orders have fallen in three of the past four months. Demand for nondefense capital goods excluding aircraft, a key gauge of business investment, fell 2.1%. 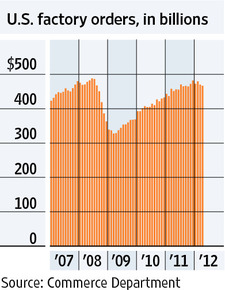