Prime Minister Lucas Papademos was expected to hold a meeting with the three Greek party leaders backing his interim government on Wednesday, potentially clearing the way for an agreement with the country’s euro-zone partners and the International Monetary Fund on a 130 billion euro ($170 billion) bailout plan. Without the aid, Greece is seen as virtually certain to default when it faces a €14.5 billion bond repayment in mid-March.

The Wall Street Journal reported that the European Central Bank gave ground on calls for it to help ease Greece’s debt burden by agreeing to swap its holdings of Greek government bonds for less than face value.

While earnings reports continue to stream in, overall market direction remains largely dictated by headlines out of Greece, strategists said. Optimism about a deal helped lift the blue-chip Dow Jones Industrial Average DJIA +0.26%  to its highest close since May 2008 on Tuesday.

“Our cautious outlook on U.S. equities for the first half of 2012 was driven in part by the risk of disorderly European bank deleveraging, with a potential spillover into [emerging market] trade finance,” said Barry Knapp, strategist at Barclays Capital, in a research note.

“Thus far, these risks have played out better than expected. The response from equities year to date [with the S&P 500 gaining 6.9%] reflects the mitigation of these risks, particularly when viewed across sectors with direct exposure to these risks and those safe havens bid up during the downturn,” Knapp wrote.

Shares of Time Warner Inc. TWX +2.76%  rose 2.9% in the premarket after the media company topped Wall Street forecasts for fourth-quarter profit and revenue and announced plans to buy back as much as $4 billion in stock and increase its dividend by 11%. Read Market Pulse on Time Warner results.

Pharmacy chain CVS Caremark Corp. CVS +1.58%  traded higher before the bell, playing off fourth-quarter earnings and revenue that both came in ahead of consensus estimates.

One option that is still being actively discussed would be for the European Central Bank to exchange its portfolio of more than 50 billion euros, or $66 billion, in Greek bonds for securities issued by Europe’s main rescue fund.

Crucially, the swap would be priced not at the bond’s face value but at the reduced price at which the central bank bought the securities, thus allowing Greece to benefit from the discount.

These discussions have been ongoing for the better part of a month now and people involved in them say that the swap is not yet a done deal. For it to take place, they say, Greece would need to reach an agreement with its private sector creditors on a restructuring and — perhaps more importantly — convince its European partners and the International Monetary Fund that it is ready to push through another set of tough economic reforms.

“The E.C.B. won’t do anything until the debt restructuring deal is complete and party leaders in Greece have agreed to reforms,” an official from the so-called troika group of institutions that are providing loans to Greece said on condition of anonymity.

To avoid a default this year, Greece needs financial assistance of 130 billion euros. The first installment is expected to be a 89 billion euro tranche in March to cover a 14.4 billion euro bond repayment.

A surprise plunge in government revenues for January of this year — spurred by an 18 percent fall in value-added tax receipts, Greece’s primary revenue source — is the latest sign that the deep recession will cause Greece to once again miss its budget deficit target.

It has also become evident that Greece’s ambitious goal of raising 9.3 billion euros this year through privatizations is going to fall short due to a lack of international interest. Officials involved in the privatization process say that 4.7 billion euros is a more realistic target, though many believe even this will be hard to meet.

European officials now estimate that Greece will need at least another 15 billion euros in 2012 to close its financing gap. But with the I.M.F. making it known that it will not increase its loans to Greece in light of its deteriorating debt profile, the burden to come up with the extra funds has now fallen upon euro zone governments, and in particular Germany as the strongest. 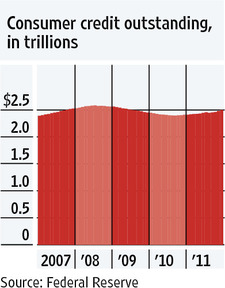 Yahoo’s chairman, Roy Bostock, and three other directors are to step down as part of a boardroom clear-out, marking the latest attempt to win back investor confidence as the US internet company pursues a change in strategic direction.

Mr Bostock announced the board-level changes, which include two new independent directors, in a letter to shareholders on Tuesday. Also stepping down at this year’s annual meeting will be Vyomesh Joshi, Arthur Kern and Gary Wilson. Mr Bostock added that Maynard Webb, a former number two at Ebay, and Alfred Amoroso, who once served on IBM’s top management committee, have been elected to replace them, and a search is under way for other independent directors.

The moves, which will leave Yahoo with a seven-member board appointed entirely since 2010, following intense pressure from Wall Street over a number of recent missteps, including the handling of leadership succession and the failure of negotiations over an acquisition by Microsoft in 2008.

The timing of the announcement raised questions about whether Yahoo’s effort to sell its large minority stakes in Yahoo Japan and Alibaba had slowed, since that might have prompted the company to accelerate the announcement of its planned board changes as a way to appease investors.

Sprint Nextel (S.N) posted a bigger loss, reflecting the higher costs of selling Apple Inc’s (AAPL.O). But the loss was smaller than expected because its signed up fewer subscribers than expected.

Since Sprint subsidizes the cost of some of its phone sales, its costs rise and profit dwindles the more customers it wins. But since subscriptions fell short of expectations, its loss was smaller than expected.

Sprint’s loss was 35 cents per share excluding unusual items compared with Wall Street expectations for a loss of 37 cents per share, according to Thomson Reuters I/B/E/S.

Its profit margin based on operating earnings before interest, depreciation and amortization (OIBDA) fell to 9.5 percent from 16 percent a year earlier but beat expectations for 8.6 percent, according to eight analyst estimates Reuters compiled.

Disney’s fiscal first-quarter profit rose a stronger-than-expected 12%, helped by revised contracts with broadcast affiliates and higher customer spending and attendance at its theme parks. Shares slipped 1.4% to $40.40 after hours, however, as revenue missed Street expectations.