Things looked bullish in the early going, but a mid-morning reversal left stocks to spend the rest of the session slowly working their way back to the flat line.

Trade today opened on a flat note, but stocks were quickly bid up to a solid gain that resulted in a new multi-month high. However, stocks were unable to sustain the move, even as the euro displayed considerable strength.

The euro sported an impressive lead over the greenback for the entire session. The currency’s climb to a near three-week high above $1.30 came amid heightened anticipation for revised measures to prevent a default by Greece. Although no new details were officially released, some speculate that Greece won’t be getting any more money from the International Monetary Fund or the Eurozone.

Chatter related to the latter matter coincided with the stock market’s pullback, possibly reflecting a mix of frustration and disappointment related to the drawn out process of shoring up conditions in Greece.

Early leaders, tech and financials were caught up in the stock market’s slide. Both sectors were up about 1% at their session highs, but each retreated into the red alongside the broad market. They eventually fought back to book modest gains, but neither displayed the same leadership as what was exhibited shortly after the open.

End results were mostly mixed as defensive-oriented telecom traded down to a 0.8% loss and health care fell 0.5%, but utilities mustered a 0.3% gain. Consumer staples stocks slipped 0.2%, which is actually on par with the 0.2% loss and 0.3% loss that cyclical sectors like consumer discretionary and industrials shed, respectively.

A decline in unemployment and pickup in manufacturing point to accelerating U.S. growth. Some economists say the numbers may not be as good as they look.

One reason: the severity of the economy’s plunge in late 2008 and early 2009 after Lehman Brothers Holdings Inc. collapsed threw a wrench into models used to smooth the data for seasonal changes, according to analysts at Goldman Sachs Group Inc. and Nomura Securities International Inc.

The jobless rate has dropped 0.4 percentage point over the past two months, according to the Labor Department, and the Institute for Supply Management’s factory index has climbed more than three points since the end of August. Signs the world’s largest economy was strengthening helped propel a 14 percent gain in the Standard & Poor’s 500 Index in the past eight weeks.

“The impact of the financial crisis does seem to have affected seasonal factors for several indicators,” Andrew Tilton, a senior economist at Goldman Sachs, said in a telephone interview from New York. It “might tend to make things look a little better in the early winter and look a little worse in the spring time.”

Most economic data are adjusted for seasonal changes to facilitate month-to-month comparisons. Without those changes, for example, construction would always pick up in the summer, when the weather is milder, and decline in the winter.

The adjustment process is unable to distinguish between a one-time shock, like Lehman’s demise, and a recurring issue that would need to be smoothed away. For that reason, the mechanism gives some data a leg up from about September through about March before turning negative the rest of the year.

If I had to pick the economy’s likeliest spoiler this year, it would be oil prices. Whether it’s Iran trying to close the strait of Hormuz or the Arab Spring  wafting through Saudi Arabia, I have no idea; but nothing matches the track record of oil in delivering nasty economic surprises.

But over the long run, something important is happening to the role of imported oil in the American economy: it’s shrinking. This comes through quite strikingly in the outlook released today by America’s  Energy Information Administration. The remarkable expansion of U.S. production from shale gas and unconventional oil sources such as the Bakken formation in North Dakota are relatively well known. There is, however, less awareness that American consumption is barely growing (see the nearby chart). The EIA has sharply revised down how much liquid fuel it reckons America will consume in 2035, to 20m barrels a day, from 22m it projected last year, which would be below the 2005 peak. Couple that with rising domestic production, and America will rely on net imports for just 36% of its liquid fuel needs in 2035, compared to 60% in 2005. 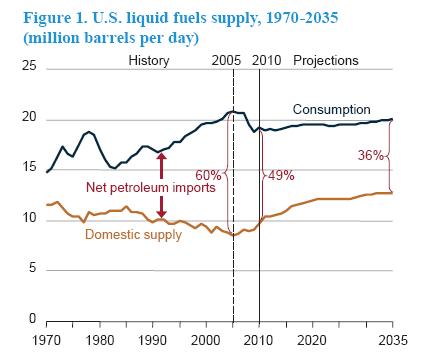 Several factors are at play. Factor one (unfortunately) is lower economic activity in the aftermath of the recession. Factor two is upward pressure on the price of oil from emerging markets demand. The EIA reckons by 2035 it will average $145/barrel in 2010 dollars, up from last year’s range of $85 to $110. The higher price stimulates domestic production, encourages conservation and makes alternatives more viable. Factor three is policy such as more demanding fuel economy standards for vehicles and energy efficiency requirements for appliances, and state portfolio standards that mandate the use of more renewables in electricity generation.

Before the bell we get results from:

At some point in the morning we hear from:

After the bell we get results from: