The U.S. economy added 200,000 jobs in December and the unemployment rate fell for the fourth month in a row, the government said Friday, in a fresh sign the economy is picking up and businesses are more willing to hire. 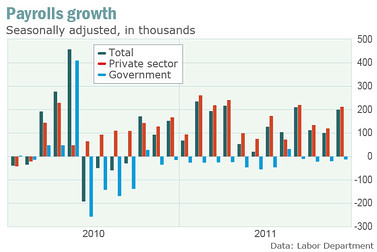 The increase in jobs last month — the fourth biggest gain of 2011 — suggests the U.S. is entering the new year with renewed vigor. Faster hiring puts more money in the hands of consumers and usually leads to an increase in spending. That’s a big deal since consumer spending accounts for as much as 70% of economic growth.

The unemployment rate edged down to 8.5% from an upwardly revised 8.7% in November, the Labor Department said.

The U.S. was expected to add 150,000 jobs and the jobless rate was forecast to rise to 8.7% from an initially reported 8.6% in November, according to a MarketWatch survey of economists.

The U.S. unemployment rate dropped to 8.5% in December, while a broader measure dropped even further to 15.2% from 15.6% the prior month, both at their lowest levels since February 2009.

While the unemployment rate has been falling in part due to people leaving the labor force, a large portion of this month’s number appears to come from people finding jobs.

The unemployment rate is calculated based on people who are without jobs, who are available to work and who have actively sought work in the prior four weeks. The “actively looking for work” definition is fairly broad, including people who contacted an employer, employment agency, job center or friends; sent out resumes or filled out applications; or answered or placed ads, among other things. The rate is calculated by dividing that number by the total number of people in the labor force.

RF Micro Devices said it expects its fiscal-third quarter revenue to miss its expectations due to weakened customer demand. Shares slid 16% to $4.76 after hours as the chip maker projects revenue of approximately $225 million, below its October view of $250 million.

Durect said a Phase III clinical study designed to measure the safety and efficacy of its post-operative pain relief drug Posidur in abdominal surgical procedures didn’t yield statistically significant results. Shares plunged 47% to 62 cents in after-hours trading as the company said it intends to hold a pre-new drug application meeting with the Food and Drug Administration after a complete analysis of the study’s data.

Apollo Group’s fiscal first-quarter earnings fell 37% on another revenue slide, but the for-profit education company reported new-enrollment growth for the first time in at least a year. Shares were up 1.4% at $54.47 after hours, as adjusted profit fell less than analysts expected as well.