WASHINGTON — A senior Iranian official on Tuesday delivered a sharp threat in response to economic sanctions being readied by the United States, saying his country would retaliate against any crackdown by blocking all oil shipments through the Strait of Hormuz, a vital artery for transporting about one-fifth of the world’s oil supply. 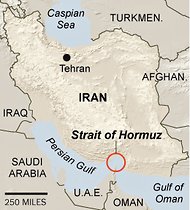 The declaration by Iran’s first vice president, Mohammad-Reza Rahimi, came as President Obama prepares to sign legislation that, if fully implemented, could substantially reduce Iran’s oil revenue in a bid to deter it from pursuing a nuclear weapons program.

Prior to the latest move, the administration had been laying the groundwork to attempt to cut off Iran from global energy markets without raising the price of gasoline or alienating some of Washington’s closest allies.

Apparently fearful of the expanded sanctions’ possible impact on the already-stressed economy of Iran, the world’s third-largest energy exporter, Mr. Rahimi said, “If they impose sanctions on Iran’s oil exports, then even one drop of oil cannot flow from the Strait of Hormuz,” according to Iran’s official news agency. Iran just began a 10-day naval exercise in the area.

In recent interviews, Obama administration officials have said that the United States has developed a plan to keep the strait open in the event of a crisis.

Oil prices are bubbling higher on concerns geopolitical risks to global oil supplies are rising, amid an increase in sectarian violence in Iraq and as Iran reacts to the prospects of increased sanctions.

In the last several weeks, traders point to a confluence of events beyond Iran and Iraq that have added to uncertainty and gained the attention of the oil market.

“You’re seeing more of these events build up and boil over in the Middle East, whether it’s Iraq, Syria, Iran,” said Andrew Lipow, president of Lipow Oil Associates.

The market is also watching Russia, where a contentious election sparked protests and claims of fraud. There is also uncertainty around the change of leadership in North Korea with the death of Kim Jong Il, and also the unresolved governance of Egypt.

Syria is another hot spot. A relatively small producer, the country reported a decline of 30 to 35 percent in its oil production due to sanctions imposed over its violent crackdown on protesters.

But a recession in Europe or any signs of weakness in the U.S. could quickly reverse the trend higher in oil prices, analysts say.

If he’s successful with his latest nominations, President Barack Obama would become the first president since Ronald Reagan to put someone new from an opposing party onto the Federal Reserve Board.

But not since Mr. Reagan appointed John LaWare, a Democrat and bank executive, has a president put someone new from an opposing party on the central bank’s Board of Governors. Mr. LaWare, who served from August 1988 until April 1995, turned out to be a hawkish figure when it came to monetary policy, putting his priority on fighting inflation.

For Tuesday, the action throughout the session was about as exciting as the Dow’s final tally indicated. The Dow remained in a tight range all day, gaining as much as 34.5 points at session highs and losing as much as 24 points at the lows. The trading range of 58.5 points was the lowest since July 20.

For the month, though, the Santa Claus rally has helped pushed the Dow up 2%. And year-to-date, the Dow is still up 6.2%.

Meanwhile, the S&P 500 finished about as close to unchanged as you can possibly get. It managed to eke out a gain of 0.1 point, or 0.01%, to 1265.43. Still, it finished above its 200-day moving average for a second straight day, a feat the bulls will definitely take comfort in.

Today’s trading was the perfect example of what tends to happen during these low volume, holiday shortened weeks. The market either rockets in either direction due to thin volume and a lack of conviction among investors. Or the action is so listless that the major indexes finish at a relative standstill.

Today was the latter. Let’s see what tomorrow brings.

No major economic data on the calendar means more of the same listless trading wouldn’t surprise anyone. Wake me when Europe erupts…or for New Years Eve.