November consumer spending was up slightly, better by 0.1%

Durable-goods orders for the month advanced 3.8%.

Corporate news ran light ahead of the Christmas holiday period for the markets. U.S. stocks trade a full, regular session before the long weekend.

Consumers ended a tumultuous — and often glum — year on a sunnier note. In December, the Thomson Reuters/University of Michigan Consumer Sentiment Index climbed to 69.9, compared with 64.1 in November. December’s reading was the fourth consecutive monthly rise. That isn’t as high as the January reading, but well above August’s low of 55.7. 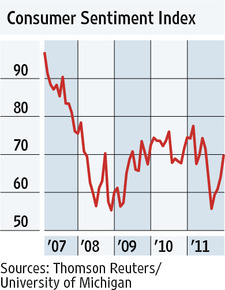 Congress, after months of bitter fighting, is poised on Friday to pass a payroll tax cut extension that President Barack Obama argues is vital to the health of the economy.

The legislation would continue for two months a 4.2 percent payroll tax rate that otherwise would expire on December 31 and ratchet up to 6.2 percent for 160 million American workers.