“Talk tough, and open the vaults.”

The European Central Bank, seen above in Frankfurt, is lending $640 billion to 523 banks to ease the credit crisis.

That should be the slogan of Mario Draghi, the president of the European Central Bank.

It would do only what central banks normally do. It would lend to banks.

It turns out that may be enough to stem the European crisis for at least a few years, and go a long way to recapitalizing banks in the process.

That fact only became clear on Wednesday, although Mr. Draghi announced his intentions on Dec. 8, when the central bank said it would offer to lend money to banks for three-year terms, in unlimited amounts, at a very low rate.

In reality, it was an offer banks could not refuse. They will initially pay the central bank’s official rate of 1 percent. But if the bank lowers the rate in coming months — as it is widely expected to do — the rate on these loans will drop as well.

There is no limit on what the banks can do with the money. But there is an obvious, virtually risk-free, option. A bank can buy short-term securities of its own government and pocket the difference — up to four or five percentage points — for the life of the securities.

But something shifted in the market over the past several days, as evidenced by the sharp plunge in yields on short-term sovereign debt. So is the crisis solved or not?

The pessimists all make great points: This does nothing to address the core Eurozone problems (true), bankers say out loud that they won’t be loading up on sovereign debt (true), there’s still the problem with marking Eurozone sovereign debt to market, which creates an incentive to keep deleveraging (true), countries still can’t print their own money (true), etc…

But here’s the thing. Although it’s a cliché, nobody is going to just ring a bell when the Eurozone crisis is over. Despite some people’s hopes, Mario Draghi isn’t going to come out and say: “We will not let Italian yields get above X.XX%, and eliminate their risk of default.”

But nobody rang a bell at the end of the US crisis either. Eventually, in March 2009, the market had determined that between the Congress and the Fed, enough had been thrown at the problem, that there was no more downside, and that the whole thing wasn’t going to come undone.

Because it’s not like the worrying actually stopped in March 2009 by any means. For months people freaked out about the “next shoe to drop” — the trillions in commercial real estate losses that everyone expected to be subprime part II. There were all kinds of worries for months even as the market went about healing itself. In fact, the root causes of the crisis — falling housing and rising foreclosures — have actually gotten worse over the last 2.5 years!

So the bottom line is not that the European crisis is over, or that they’ve found the solution. But it’s possible that they’ve turned a major corner, and that if you’re waiting for someone to announce “all clear” or a solution (whatever that means), you’re going to be disappointed.

U.S. home sales from 2007 through 2010 were about 14% lower than first reported, a real estate trade group said Wednesday, a sharp revision showing the housing bust was far worse than initially thought. 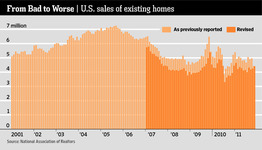 The National Association of Realtors revised downward its sales figures since 2007, using annual Census survey data to recalculate how many homes were sold.

Sales for all of 2011 are on track to hit around 4.25 million, up slightly from last year’s level of 4.19 million, which was revised downward 15%, said Lawrence Yun, the Realtors’ group’s top economist.

The Realtors’ new figures also show 2008 was the worst year for home sales during the housing bust, with only 4.11 million sold, down 16% from the previous estimate of 4.91 million.

Home sales for the first 10 months of this year were also revised downward. October’s sales pace was lowered to a rate of about 4.25 million sales per year, from an original estimate, from an original level of 4.97 million.