$261.98 billion: How much more companies took in than they spent in the third quarter. 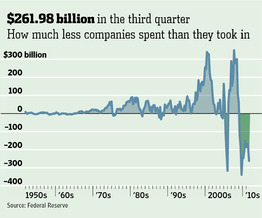 Companies continue to sit on lots of cash, frustrating those hoping to see it deployed to spark jobs growth. But on the upside this buffer makes U.S. firms less vulnerable to contagion if the European debt crisis escalates.

Nonfinancial companies held more than $2.1 trillion in cash and other liquid assets at the end of September, according to the Federal Reserve‘s latest flow of funds report. That represents some 7.2% of all company assets, down slightly from the second quarter but still near highs last seen in the early 1960s.

While businesses are adding to debt, most companies also are taking in more money than they’re spending. The financing gap, corporate cash flow subtracted from capital investment, has been negative since the recession hit and the deficit expanded in the third quarter to $261.98 billion from $188.05 billion in the second. Usually that figure is positive as companies expand operations through borrowing.

Below is a chart of our CDS index (blue line) compared to a chart of the S&P 500 Financial sector (green line) going back to June 2008.

Financial sector default risk managed to remain relatively low from mid-2009 to mid-2011, but for the past few months, it has skyrocketed back to levels not seen since the financial crisis.  The two recent peaks in our CDS index came in early October and late November of this year.  The index has pulled back some since the end of November, but default risk still remains very high.  Weakness in European banks has been a key contributor to the current spike, but the big financials here in the US have seen default risk spike quite significantly as well.

The announcement comes as expectations for an agreement on extending the payroll tax cut fell into doubt Sunday after Speaker John Boehner (R-Ohio) said that House Republicans opposed compromise legislation that passed the Senate in an overwhelming 89-10 vote Saturday.

Unless dozens of Republicans defect, the Senate’s bill is expected to fail in the House, and Cantor’s office advised members that additional votes related to the payroll tax cut are possible.

A Cantor spokeswoman said those votes have yet to be determined. The House could try to amend the Senate bill or approve a motion to go to a conference committee to reconcile the Senate bill with a version the House passed last week.

The final convoy of U.S. troops left Iraq on Sunday, bringing an end to almost nine years of war in which tens of thouands of Iraqis and nearly 4,500 Americans died, media reports said.

Troops head home as American officials sign over the last U.S. base to the Iraqi military. Video courtesy of Reuters.

The last column of roughly 100 mainly U.S. military MRAP armored vehicles holding 500 U.S. troops crossed the southern Iraqi desert from their last base during the night and daybreak toward the Kuwaiti border, Reuters reported.

The last U.S. military trucks and tractor trailers crossed the border early Sunday morning, with horns blaring and crews waving at fellow troops along the route, the wire service said.

Today’s in-store sensors and motion trackers can watch your footsteps, see what your hands do and know when you hesitate over a product. But such technology doesn’t have to be foreboding, Holly Finn says. It may turn out to be a gift to buyers as much as sellers.

Americans shopping online parted with $30.9 billion from Nov. 1 through Dec. 16, versus $26.9 billion a year ago, the research firm said in a news release.

Internet sales topped $1 billion on four days last week, with comScore expecting it to be the biggest week of online consuming this holiday season. Cyber Monday, the Monday after Thanksgiving, is still the heaviest online shipping day on record, with $1.25 billion in sales.

In each week during the online holiday season, free-shipping promotions applied to at least half of all transactions, comScore reported.

Personal income and spending for November

Kim, 70, died on Dec. 17 of exhaustion brought on by a sudden illness while on a domestic train trip, the official Korean Central News Agency said. Kim probably had a stroke in August 2008 and may have also contracted pancreatic cancer, according to South Korean news reports.