Germany and the eurozone’s five other triple A members face having their top-notch ratings downgraded after Standard & Poor’s put 15 countries in the single currency bloc on negative creditwatch.

The US rating agency has warned that eurozone nations including Germany, France, Austria, Finland, the Netherlands and Luxembourg were under review – meaning they have a one in two chance of a downgrade within 90 days. However, S&P said it expected to conclude its review “as soon as possible” following this week’s summit of EU leaders on Friday.

It warned all of the six triple A rated governments that their ratings could be lowered to AA+ if the creditwatch review failed to convince its experts. Markets have been braced for a potential downgrade of France, but few expected Germany’s top rating to be called into question.

With regard to Germany, S&P said it was worried about “the potential impact … of what we view as deepening political, financial and monetary problems with the European economic and monetary union.”

The agency is acting as eurozone governments make further progress towards a comprehensive deal to contain the region’s sovereign debate crisis ahead of a crucial EU summit on December 9. Berlin and Paris want the eurozone to sign up to tougher fiscal rules to calm investors’ worries.

S&P told governments: “It is our opinion that the lack of progress the European policymakers have so far made in controlling the spread of the financial crisis may reflect structural weaknesses in the decision-making process within the eurozone and European Union.”

The grand plan outlined by France and Germany on Monday for European treaty change breaks no new ground in terms of ideas — all the proposals already exist in various legal acts, the only problem is they have never been observed in practice.

If there is one difference it is that France and Germany, the political and economic motors of the euro zone, now want to assemble all the separate pieces of legislation into a single EU treaty. But otherwise, there is little change.

French President Nicolas Sarkozy and German Chancellor Angela Merkel will present their ideas to the rest of the EU at a summit on December 9, and argue that changing the EU’s basic law is necessary to prevent a sovereign debt crisis happening again.

But analysts doubt whether elevating pre-existing rules to treaty level will some how make them tougher, or obeyed.

Ezra Klein reports on his conversations with Germans:

The German embrace of austerity raises an obvious question: If Southern Europe is to cut and tax, how will they grow? The German answer, put simply, is, “like we did.” Ten years ago, the Germans are quick to note, unemployment in Germany was 10 percent and structural deficits were large. Germany was called “the sick man of Europe.” They attribute their subsequent success to a series of painful reforms they made to their unemployment insurance system, their health-care sector, and other pieces of their social safety net. Many figure that if they could do it, so too can Southern Europe. In truth, it’s probably not that easy — Southern Europe doesn’t have the industrial strength that Germany does, and no longer even controls its own currency levels — but it makes sense to the man on the street.

Actually, it’s much worse than Ezra says. Here’s the key to the German recovery: 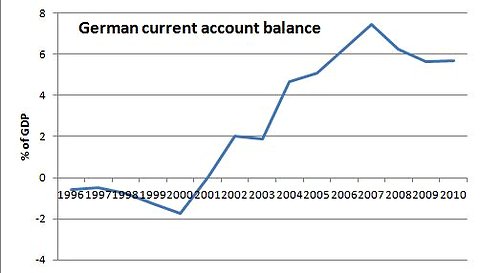 So what the Germans are in effect saying is that everyone should run huge trade surpluses.

May I humbly suggest that this poses an arithmetic problem?

And this isn’t trivial — the adding-up constraint, the point that if Southern Europe is going to shrink its trade deficits somebody has to move in the opposite direction, is the core of the problem.

Last week’s huge rally in Europe spilled over into this week, and the S&P 500 followed suit, rising nearly 1.5% in the opening minutes. A bit selling followed the lunch hour, but buyers took control of the last 20 minutes of trading for a closing gain of 1.03%. Year-to-date index is just fractionally in the red, down 0.04% but 7.81% below the April 29th interim high. The index needs about 8 points to rise above its 200-day moving average.

We get results from AutoZone before the open and SAIC after the close.