Greek Prime Minister George Papandreou sealed a deal with the opposition on a crisis coalition to approve an international bailout, but details remain thin despite an EU ultimatum for Athens to get serious about tackling its huge problems

With Greece due to run out of money in a few weeks, the European Union told its bickering parties to explain by Monday evening how they would form a unity government to enact the 130 billion euro emergency funding package.

Papandreou, who sealed his fate last week with a disastrous  attempt to call a referendum on the bailout, will stand down when the new government takes over, the office of the Greek president said.

ATHENS—Greece’s major political parties on Sunday agreed to form a national unity government that will oversee elections after putting in place a debt-slashing deal, in the hope of averting financial catastrophe and winning back the trust of the nation’s European partners. 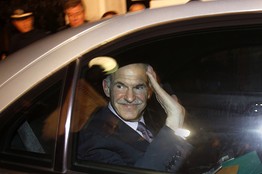 ReutersGreek Prime Minister George Papandreou waves from his car as he leaves the presidential palace after a meeting with President Karolos Papoulias and Mr. Samaras in Athens on Sunday. 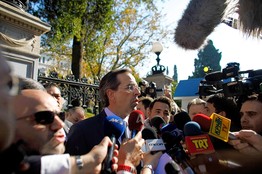 Associated PressOpposition leader Antonis Samaras met with Prime Minister George Papandreou on Sunday to settle on who will lead the bipartisan government and what its life span and powers will be.

The deal came about after Prime Minister George Papandreou agreed to step down to make way for a new prime minister under a commonly accepted government.

The quest for a unity government is aimed at avoiding an early, messy debt default and uncontrolled exit from the euro, a prospect that had loomed large in the past week of political turmoil in Athens.

The administration is hoping to agree on a new government by Monday, ahead of a meeting of euro-zone finance ministers in Brussels that is expected to discuss whether to release Greece’s next aid payment. Government spokesman Elias Mossialos said cabinet ministers serving in the new coalition will be named as early as Monday and the new government could be sworn in by the end of the week.

“There was pressure from the euro zone to have an agreement on a unity government before markets open Monday. This agreement has been reached,” a Greek cabinet minister said.

Concern about Jefferies Group Inc. eased in the options market after the investment bank boosted disclosure of its European holdings, driving down put prices.

The shares fell 18 percent to $12.07 last week after losses on European government bonds drove MF Global Holdings Ltd. into bankruptcy, spurring speculation other securities firms will be hobbled by the crisis. Jefferies responded by providing details about its European holdings, and its biggest shareholder, Leucadia National Corp., bought more stock.

Just days after the Bank of America chief executive reversed course on the bank’s controversial decision to charge customers a debit-card usage fee, Bank of America said late Thursday that it plans to issue up to 400 million shares of new common stock. That followed Mr. Moynihan’s repeated declarations throughout the year that the bank didn’t need to raise additional capital, largely because he didn’t want to dilute existing shareholders.

Next week’s tape mainly involves a lot of talking, by euro zone ministers and Fed heads and more.

Import and export prices for October