Nate Silver of the New York Times runs the numbers on S&P’s ratings of sovereign debt:

In fact, the evidence from the past five years suggests that it may be worthwhile to adopt a contrarian investing strategy that specifically bets against S.&P.’s ratings. If you were trying to predict a country’s default risk today, based on the market’s perception of its default risk two years ago as well as its S.&P. rating at that time, you would find that accounting for S.&P. ratings actually subtracted value from your model. That is, if the market had priced two countries as having a 20 percent default risk in 2009, but one of them had a AA rating from S.&P. and the other had a BB rating, the country with the worse S.&P. rating is likely to have proven to be the safer bet.

What factors is S.&P. looking at when it rates sovereign debt? A country’s debt-to-G.D.P. ratio? Its inflation rate? The size of its annual deficits?

S.&P. does look at each of these factors. But it also places very heavy emphasis on subjective views about a country’s political environment. In fact, these political factors are at least as important as economic variables in determining their ratings.

For instance, the S.&P. ratings have an extremely strong relationship with a measure of political risk known as the Corruption Perceptions Index, which is published annually by Transparency International. These ratings have been the subject of much criticism because they are highly subjective, relying on a composite of surveys conducted among “experts” at international organizations who may have spent little time in most of the countries and who may instead base their judgments on cultural stereotypes. 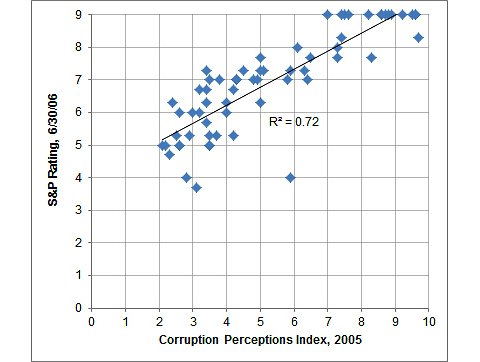 I don’t know whether or not S.&P. looks at these ratings. But the fact that the two sets of ratings are so closely related is troublesome. It suggests that S.&P. is making a lot of judgment calls about countries they have no particular knowledge about. Keep in mind that even when it comes to the United States, S.&P. made a $2 trillion error that reflects their lack of understanding of the way that bills are scored by the Congressional Budget Office. Are we to expect that they add value based on their perceptions of the political climate in Kazakhstan, or Cyprus, or Uganda?

I’m not an efficient markets hypothesis guy. I think that markets can misprice commodities, and that canny investors can profit from them. But relying on the consensus of the market is almost certainly better than relying on Standard & Poor’s, whose advice has more often than not led investors toward the losing side of bets. The fact that billions of dollars in wealth are tied up in the judgments of a company with such a poor record is all the proof you should require that the global financial system is in need of reform.