Here’s the latest on the manufactured crisis that is the debt ceiling vote:

House Majority Leader Eric Cantor (R-Va.) delivered a blunt message to the Republican Conference Tuesday morning: Quit the “grumbling” and “whining” and come together to rally behind Speaker John Boehner to pass his debt ceiling plan.

Cantor’s heavy rhetoric came out in a closed session at the Capitol Hill Club as the GOP majority tried to whip up support for Boehner’s latest deficit package. Cantor summed up what he knew many Republicans were thinking as they head into another critical vote.

“The debt limit vote sucks,” he said, according to an attendee of the closed meeting. But Republicans have three options, Cantor said: risk default, pass Senate Majority Leader Harry Reid’s (D-Nev.) plan— which he thinks gives President Barack Obama a blank check — or “call the president’s bluff” by passing the Boehner plan, which not only cuts deeply into domestic spending but calls for a bipartisan commission to find more savings.Cantor also announced that the House will hold a vote on a balanced budget amendment Thursday, a nod to vocal conservatives in the conference.

House Republican leaders will spend Tuesday and Wednesday cobbling together votes to pass Boehner’s plan to hike the debt ceiling by $1 trillion and cut federal spending by a greater amount. Treasury says that the nation will run out of the ability to borrow money on Aug. 2.

One of the most influential conservatives in Congress says he’s confident his own Speaker John Boehner (R-OH) will lack the votes to pass his plan to raise the debt limit in the House of Representatives.

Complicating matters further for Boehner — the Dems’ top vote counter wryly suggested at a simultaneous press briefing that few, if any, Democrats will vote for the GOP’s bill, since there is a preferable Democratic plan waiting in the wings. That suggests House conservatives are holding the line against any debt limit increase that can plausibly pass the Senate — and that Democrats will have added leverage to muscle their own plan through both chambers.

“I am confident as of this morning that there are not 218 Republicans in support of the plan,” Rep. Jim Jordan (R-OH) told reporters at a Tuesday morning press briefing.

The Administration strongly opposes House passage of the amendment in the nature of a substitute to S. 627. If S. 627 is presented to the President, the President’s senior advisors would recommend that he veto this bill.

Compare that to the statement (also pdf) they released last week on Cut, Cap and Balance, which spent four paragraphs detailing the problems with the plan and concluded:

If the President were presented this bill for signature, he would veto it.

“The President’s seniors advisers would recommend that he veto” and ”he would veto” are two very different statements. There’s wiggle room in this statement, though whether the administration actually intends to use it is unclear.

Credit-market investors are becoming warier of a U.S. default. The spread on five-year credit default swaps on U.S. debt rose to 0.57 percentage points Monday — the highest since early 2010 — meaning the annual cost of insuring $10 million in U.S. debt against default is $57,000. But during the financial crisis, spreads in the thinly traded market were much higher. 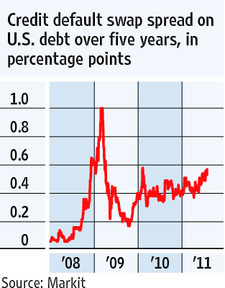 It costs more to insure U.S. Treasuries for one year than for five years for the first time, as investors anticipate that a failure to raise the debt ceiling will prompt rating companies to declare the nation in default.

The CHART OF THE DAY shows that one-year credit-default swaps spiked to a record 80 basis points today, according to BNP Paribas SA, up from 46 basis points on July 22. The contracts now exceed five-year swaps by 23 basis points.

A political impasse in Washington could delay debt or interest payments, triggering a payout on swaps and a loss of the nation’s AAA credit rating. Longer-term debt insurance is typically more expensive than shorter-term protection, and an inversion of the swap curve signals concern there’s an imminent risk of default.

The S&P 500 gave up 0.41% as political tension over the debt ceiling deadline continues to rise. A modest mid-afternoon rally took the index briefly above the opening price, but the the selloff in the final hour took us back to a level near the morning low. The index is now up 5.91% year-to-date and 2.32% below the interim high set on April 29.