Expect to see a lot of discussion in the media on the disappointing jobs number over this weekend. There are a few schools of thought on what it means for the markets. One of the most important is that if this is in fact indicative of a serious slowdown in the economy’s recovery from the banking crisis/recession, both the Fed and our elected officials are out of bullets politically. The flipside to that argument, the bullish case, is that some of the data we have been seeing over the past 2 months is merely a roadbump along a slow and painful recovery, and economic data later this summer will resume its upward trajectory. In my view our biggest headwind in the economy is Washington and our media’s odd obsession with the near term federal deficit at the expense of job creation and stimulus. But don’t trust me about the economy vs. deficit debate, trust the bond market. The austerity cuts happening around the world are clearly necessary over the longterm. And some would argue, until economies can get their fiscal house in order, there could always be more debt crises around the corner, further stifling growth due to fear. That may be true, but I know one thing, austerity measures, and the fear of austerity measures are bad for GDP, and bad GDP growth is bad for markets.

Friday’s grim jobs report will no doubt have many Federal Reserve officials wondering what, if anything, they can do to support an economy that appears to be badly stumbling. Fed Chairman Ben Bernanke laid out his thinking in his June press conference.

Despite the bad jobs numbers, it appears unlikely that the Fed will choose to do anything soon.

–Overall the June Employment Report was quite disappointing , with basically no positive offsets to the poor headline results. The best we can say is that other data have shown better signs in recent weeks, including jobless claims, chain-store sales, gasoline prices, and auto production. Nevertheless, the weak trend in payroll employment indicates some downside risk to our second half growth views. –Goldman Sachs

– Ugly. I mean really ugly., The June employment data were stunningly weak. Job gains were the lowest since last September when payrolls declined. Given the measurement error, you cannot even say that any new hiring occurred in June. Worse, the April and May gains were revised downward indicating that smaller businesses are not out there hiring either. That is consistent with the surveys coming out of the National Federation of Independent Business and is a discouraging trend since that is where most of the hiring occurs. Interestingly, there were almost no sectors that showed any strong gains but only a few industries cut sharply. –Naroff Economic Advisors

– Nonfarm establishments added a scant 18,000 workers to their payrolls in June with private sector firms adding 57,000 while governments cut staff by 39,000. As if these markedly weaker than expected news isn’t enough, the weak May data were revised down. The exception to the overarching gloom in the headline numbers was the manufacturing sector, which added 6,000 workers after cutting payrolls by less in May than previously reported. Weakness permeated most industries including private sector education, which fell 17,000, the biggest cutback in nearly two years. Apart from manufacturing, two industries — leisure and hospitality and retail — behaved roughly as expected reversing some or all of the May declines. –David Resler, Nomura Global Economics

Markets are reacting to the “surprising” NFP disappointment of 18k.

Surprising? Really? To whom?

ADP’s track record has been awful at forecasting BLS; the rest of the economic data is suggestive of a significant slowing (but not a recession).

The work of Reinhart & Rogoff is rather conclusive in showing that employment and GDP post Credit Crisis is weak. And as we have noted ad nauseum, most of the Wall Street community has been looking at the wrong data set. WW2 recession recoveries provide little or no insight into post credit crisis recoveries. The causes and arcs of collapse and recovery are simply too different.

Which leads us to the markets reaction to today’s data:

In the not too distant past, the market might have been inclined to rally following such a horrific data point. The working assumption is that the Fed, or perhaps Congress, would respond to the economic distress. But the immediate market reaction shows that no one is expecting a cavalry charge to save the day.

Don’t look now, but there’s a potential “head and shoulders” pattern forming on the S&P 500, a bearish formation that often presages a reversal in the market. 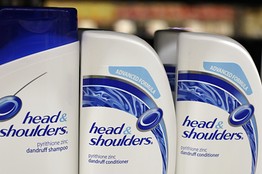